Thanksgiving was a wonderful day. A day to truly be thankful for. I got to see the descendants of the original family that built and lived in our great old house for 100 years. They were having a little family reunion and asked if they could come take pictures outside in front. I told them they could take pictures inside too. I met a lot of them about 5 years ago, after we had finally gotten moved in and settled, and this time I got to meet even more of them.

I wanted them to love the house, and to know we love it as much as they do. I wanted them to know that we will care for it to the very best of our abilities as long as humanly possible. Living history walked through our front door today. This made me incredibly happy. We got to hear stories and see smiling faces, relive memories and hear about childhoods in this big wonderful place. I felt truly honored and grateful to this family who took care of this house as long as they could and then were gracious enough to sell it outside their family so it could continue as someone else’s story when they could no longer care for it.

So how did we get here? From descendants of this house to it becoming our house? Well that my friends involves a lot of miracles.

The first miracle started when I was ten years old. I was a voracious reader, plowing through every book I could check out at the library. The Little House books, The Chronicles of Narnia, classics, fairy tales, were all read by me. Then my best friend lent me a strange book she was reading. It was “Gone-Away Lake” by Elizabeth Enright. This was absolutely like nothing I had ever read. It was about two cousins who stumble upon a whole bunch of abandoned Victorian houses. They find a brother and sister who live in two of them who grew up there as children. They all become friends and the houses are explored, made into clubs, and they even get scared in one! Many of the Victorian vocabulary words I did not know, but it did not matter. I had found my favorite book and my calling.

The second miracle was my answered prayer many years later of a kind husband who understood my strange love and obsession with old houses. We tried many times for over ten years to purchase a Victorian house, but every time it fell through. Either it was too expensive, massive things were wrong, someone outbid us, or we had no money. There always seemed to be something wrong! In the meantime, we lived for seven years in a wonderful old bungalow by the college, and then five years in a smaller bungalow in the same neighborhood.  For 3 years during this period I even got to be the director of a historic Victorian home and to care for it, but although this was wonderful, my family and I still wanted to live in one.

“If you don’t have a dream, how you gonna have a dream come true?”
-Rodgers & Hammerstein

But I had a dream. I loved this street in our town called Kansas Avenue. It was lined with old stately homes, many of the Victorian species. Many nights driving around I would ask my husband to take me there. “Take me to Kansas Street.” There I would pretend to live in one of them, being a happy family inside one of those shining in the night houses. I even wrote a book all about some children in a Victorian house during this time. (Fun fact: mostly based on the house I live in now!) It later became “The Secret of Sterling House.” Living in Sterling house in my imagination was a lot of fun and definitely helped to calm the longing.

I would pour out my heart to God, asking him to help us live in our own Victorian. Every time I thought of it I prayed, until one day God answered.  I felt as though he was talking to me and he told me to wait 2 years and everything would be fine. I was livid. Two years? When I had already waited so long? But then I had peace. My son would not be a baby anymore and it would be much easier to sell our house if he was older. Ok God, I would wait.

During that time I would get scared, but instead of just praying for a house again I would pray for God’s help in keeping my faith strong and helping me have peace. Then, one day I began painting, fixing, planting and cleaning. It had been two years and it was time to list our house. So we did, even though we had no house to move to! Not a single Victorian house in our area was on the market, but we listed anyway because I was walking blindly, but God was leading  Our house sold in 3 days.

I was led to a blog during this time- Memories on Clover Lane and Sara told her story of how she found her home to raise her children in. She walked by it and fell in love with it (I think it was in her neighborhood). It wasn’t for sale but her family needed a larger house and it was perfect. She decided to write a letter to the owners asking them if they would let her know if they ever wanted to sell it because she loved it.

A few months later they did contact her and pretty soon they were living in that house!

So, inspired by Sara at Clover Lane, I wrote a letter too. My favorite house on Kansas Street was owned by one of my old college professors. She was an amazing lady who had a passion for writing and religion. I knew that she had moved out of state recently but had not sold her home. I wrote to her asking if she ever did want to sell it if she would let me know; as my husband and i would genuinely love to live in it and preserve it. A few days later she called me and that was the beginning of our “happily ever after.” 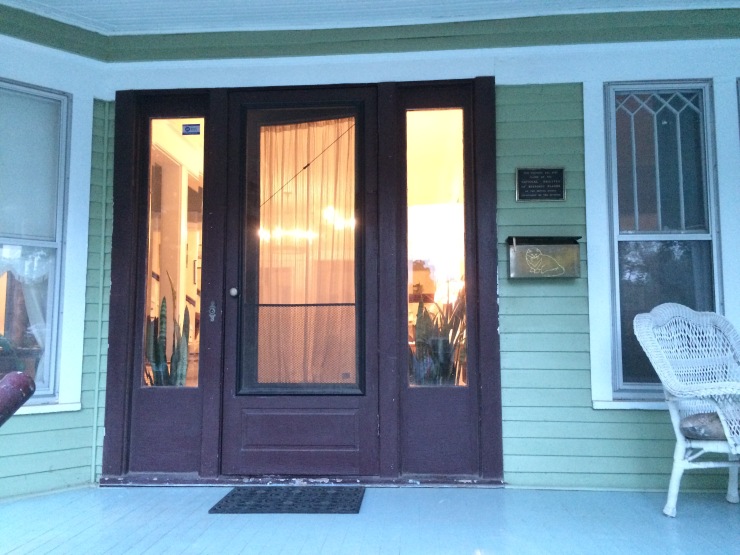 There were bumps in the road, of course. Securing a loan on a house that needed so much work, living with my mom until the renters found new housing, termites were found in the basement and the roof life had literally months left on the expiration date. But through it all I had a strange, yet comforting peace. Anxiety should have held me captive (as it had about houses so many times in the past), making me stressed that this was just another house I was going to fall in love with that I would never live in. Instead I felt strangely calm and open about our future.  I thank God for his peace because without it I would have fallen apart worse than I had when previous dream houses fell through. We didn’t have another house to go to!

In the end everything worked out according to His riches and glory. I certainly did not have the power to fulfill this dream. I had to be strong and faithful and believe that God put the desire to save an old house and raise my family in it in my heart in the first place, so he knew we would end up living in a Victorian house. I know things had to be on his timing too!  I still marvel at the house he chose for us. Its the best , largest, with almost every crazy thing on my Victorian wish list!

Right after we moved in I found one I had written twelve years before when we were first married and I compared it to this wonderful house we had just bought. Our house had everything on that list except a back staircase (and it did have that until 1966 when the original family enlarged the downstairs bathroom!). Realizing how much God did listen and how much he did love me when I saw this list I had completely forgotten about was kind of earth-shattering! Sitting on the bare floor i just cried. I felt so honored.

We are still here, 7 years later and I couldn’t have asked for a better house!

So what am I thankful for? I’m thankful I am a child of God.  Please know that he loves you too. It isn’t about asking for riches or even houses. It’s the thought that the designer of the universe cares for you, a tiny speck in the belts of time and space. You are important to him! Just talk to him. He is listening!

With house love and blessings to you and yours,