I’m participating in the #100dayproject with my subject matter as secret places. I’m posting on instagram (blackmarigold80) every day possible and re-capping every 10 pieces here and going more in-depth. Here we go!

My first piece I actually created in 2015. I’m cheating a bit but starting with it because it is the “muse” for this body of work. There is just something about secret rooms and dead spaces that I cannot resist. This depicts my third floor with its tiny closet doors tucked under the eaves of the roof in the rooms. I was inspired by Irene Burns’ use of heavy graphite and a clear water wash over it to dissolve and set it; giving it a deep, almost varnished look.

The next piece I did was inspired by a little closets on the third floor and the book “Go to the Room of the Eyes” by Betty K. Erwin. A secret door is found inside a closet under the eaves on their third floor. It leads to a hidden room! I secretly wanted this to be in my house as well and my closets are very deep and very dark. I had never seen the ends of them before. I finally stuck my phone on a selfie stick so I could get pictures. No doors. Oh well I drew what I thought it would look like if there had been! (It’s a cutaway of the wall.)

The third piece is what was actually in the closet. This is the right side of the closet behind the door in piece No. 1 Treacherous. There was all kinds of detritus in the back. It was eerie.

Number 4 is the closet opposite this one in the North half of our third floor. I call them “Alice” closets because the doors are so small. These closets give me the wonderfully Victorian creepy vibe from the 1988 foreign version of Alice in Wonderland-  Neco Z Alenky (Something from Alice) by the Surrealist film master Jan Svankmejer. It’s my favorite version and I’ll post on it soon.

Number 5 was pretty different. I had been working on all the cross-hatching on and off and got it finished. I was also in the mood for a little comedy relief so I threw it in. Dark rides and funhouses totally inspire me to do art about secret places. Plus I was watching “The Ghost and Mr. Chicken” and the haunted house in that movie is like a fun house! This is my beloved toy, the Weebles Haunted House, opened, modded a bit, with the Wacky Shack facade from Joyland in Wichita, Kansas (now abandoned but much loved by childhood me). 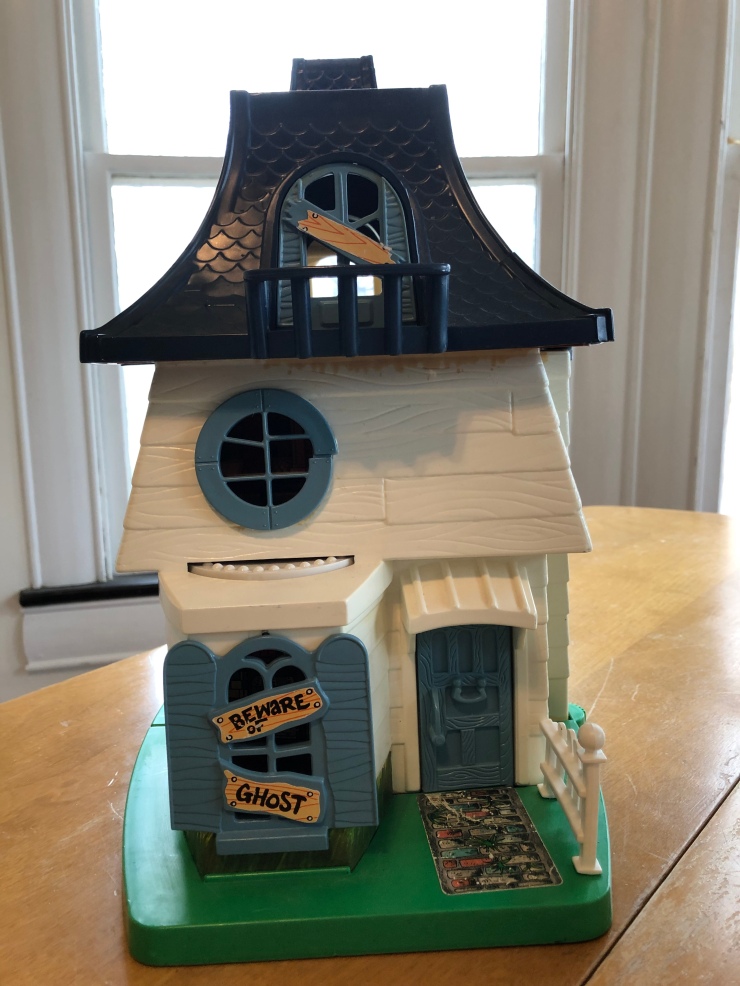 Number/Day 6 was a quick sketch of the back of a closet on the third floor. You can scoot to the back and look with a flashlight to see a very small tunnel along the roof eave that leads to the two other closets on this side of the house. I had no idea it was there but my cat found it! I let her explore one day while I was working on that floor. I let her in one closet. I went into another room a bit later, opened the closet door in there and out popped an extremely dusty Maddy cat! I was completely shocked! She was terribly proud of herself and showed me her trick! I opened the other door and she spent the rest of the afternoon popping in and out of closets! She still loves to do this, and our dog likes to try but she’s a bit too big.

Day 7 was another closet sketch. This one is the opposite side of the closet with the nest. It connects and in the middle, also connected, is the closet in the next picture with my dog. Yep, all three connect via a tiny passage!

Here I was drawing the great rafters. Our roof curves at the bottom instead of having a regular straight angle. The straight rafters are nailed to these specialty curved rafters that give the roof its shape. Here they are, sticking out into this closet.

On day 8- I drew my golden retriever, Abbey, in the closet in the same room as the one with the bird’s nest. She is much like the cat as the closets holds endless fascination and wild animal smells for her. She can’t get through the  tiny passage the cat can so she lays down in front of an opening and waits for prey. This closet is full of treasure- but it’s just window sashes, not gold. The sashes from the windows with air conditioners are stored here. Of particular interest is a curved sash, painted black that goes to the dining room. 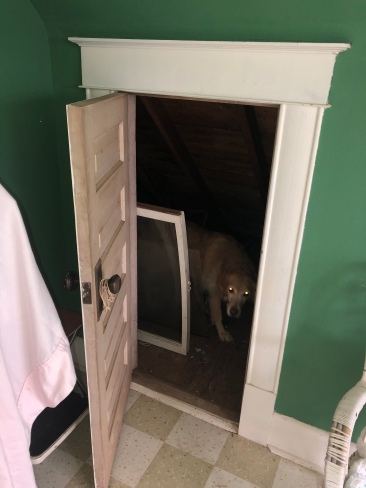 The last two are about our missing, boarded up, servants’ staircase. We were told there had been one and that is was removed to enlarge the downstairs bath and to make it handicapped accessible. I didn’t think much about it (except kind of wishing we still had them). I knew the door to them on the second floor now led to a linen closet, but I had no idea how much dead space was left over, even after the closet addition. And then WE OPENED THE BATHROOM CEILING. (Side note here: if you can help it don’t open a ceiling unless you are pretty sure it has money in it.)

Did we do anything with this two-story secret space? No. We couldn’t think what.  But I took lots of pictures. Which led to the 9th piece. For my 10th piece I thought about “reading” my house and how looking carefully at all the clues had enlightened me as to the changes that have happened over time. The sloped ceiling in the back hall tells of a staircase, now long gone. The same staircase missing in the last picture. A tale about a sister making a map of those back stairs as to mark which ones creaked when you stepped on them floats through my mind. The stairs used to come out into the kitchen, and when we opened the shower/kitchen wall to do plumbing work we found the door framing. There are vestiges everywhere of things that were and things that have been. Hopefully we are healing as many of those scars as possible for this old girl.

Hidden rooms, secret passages and dead spaces to you from Kansas Street,