Let me start by saying information on anything other than Paddington from Gabrielle Designs in England seems to be very hard to come by on the internet. I miss the internet of the first days where you could find blogs easily and find what you wanted. These days it’s all about what they think you will buy. I wanted to put this information out there for other collectors to hopefully find and for me to remember as well. The best source in Shirley Clarkson’s own book about her business, Gabrielle. I discuss it later in this blog.

It all started with Paddington (as a lot of good things do!). I had always been a fan. I watched his stop-motion antics on Nickelodeon and read his funny stories. I even painted him! When I was teaching first grade I decided to buy a real, made in England Paddington to show my students when I read Michael Bonds wonderful books to them. I had an old Paddington from when I was a child, but this one would be different!

I was enchanted by Gabrielle Designs rendition of one of my favorite characters and next bought an Aunt Lucy to go with our Paddington. (I tried to make her some glasses, but kind of botched it!)

Then I bought Shirley Clarkson’s wonderful book  “Bearly Believable.” It was such a fun read. I enjoyed her life story so much. It warmed my heart that she and her husband were behind the invention and manufacture of the first Paddington Bears. 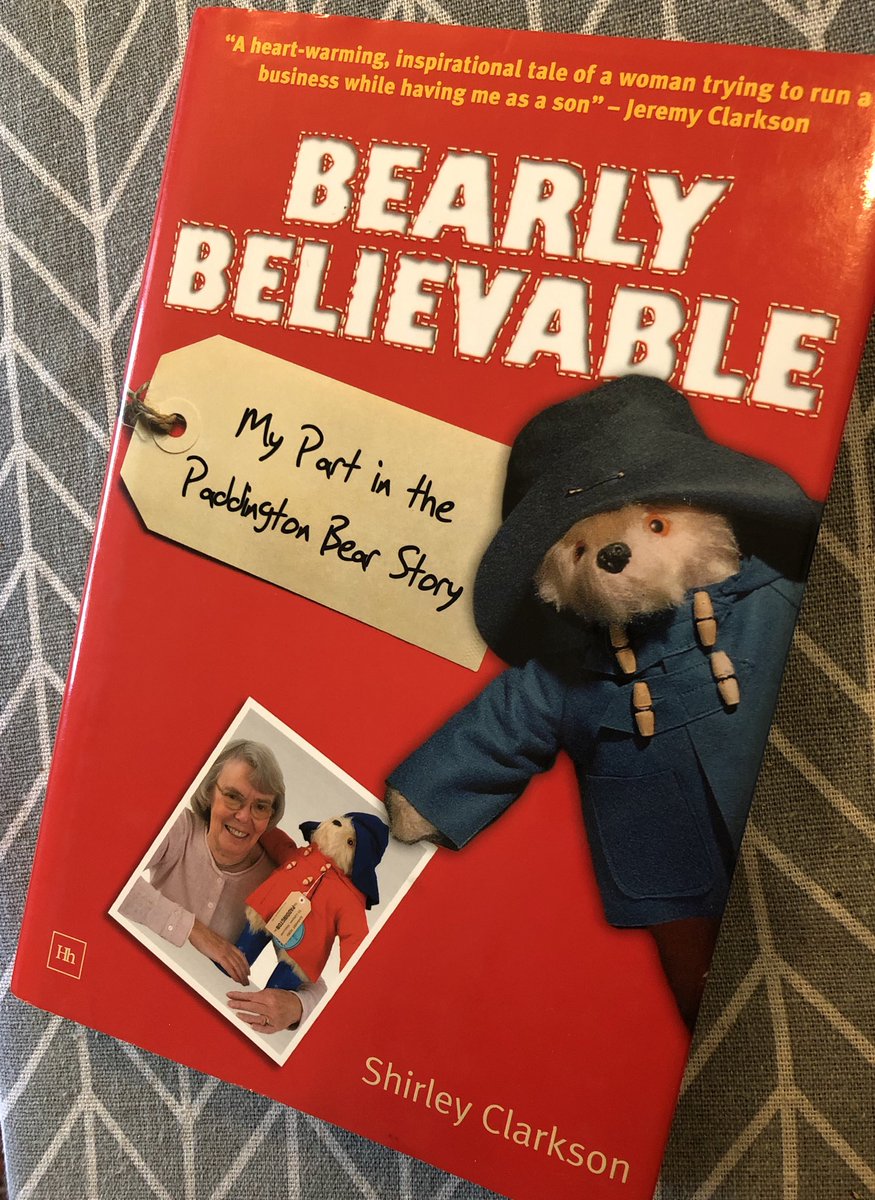 I then purchased another Aunt Lucy, this one in my favorite colorway complete with her spectacles. I was going to sell the first one, but I still haven’t done it.  One day.

And since we have so many pajama days at school I had to get this sweetie!

Of course, E-Bay is a goldmine. If you wait and watch, and aren’t too picky and can fix things up yourself, you can get wonderful deals.

Later, I was browsing E-Bay seeing what Gabrielle listings they had other than Paddington when I came across Tigger, Eeyore, and Pooh. They were going cheap so I bought them as I could. Tigger came first because he was so cute I fell in love with him.
The quality of workmanship and materials was amazing! Tigger is hand-silkscreened corduroy. Eeyore is felted wool, twisted wool mane, and eyes that are the same as the Aunt Lucy bear. His tail even comes off it’s button and it’s tied with ribbon.

Pooh is plush with a hand-knitted sweater. Just his legs are jointed. He is not my favorite style of Pooh, but he was one of the first ever made, long before Gund or Classic Pooh came into the picture. Gabrielle did try again and subsequent bears looked more like Pooh.

Next, I had to find a Kanga and a Roo. The other animals besides Pooh don’t become available very often, so it took awhile to find any others. The next year I found them. Lovingly made in velvet with baby Roo able to jump out of his mother’s pocket.

Well, I still had to find a piglet, which seemed the hardest! When this set started bidding really low I jumped on it!

This lovely set was made for Theodore’s Bear Emporium in London. It had a Piglet! Pooh was smaller and looked more like Pooh. Tigger and Eeyore were also smaller and made of lesser-grade materials. They are still cute though! I think they were made circa 1995.

All together now with a Steiff rabbit to fill in for Rabbit!

Along the way I found some other Gabriel concoctions! There are many more! Here is “Reckless Rat” from the British “Captain Beaky and His Band.”

Then, Paddington’s creator, Michael Bond, wrote a story of a little Texas armadillo called “J.D. Polson and the Liberty Head Dime.” Here is that dillo- missing his visor and ‘Pan-Arm’ bag with bumblebee snack.

And a very cute tea scene!

An old catalog. They never did produce Rabbit or Owl for the Pooh series.

With Gabrielle Designs love to you from Kansas Street,